The Joy of Sasha’s

If this is my readers first introduction to the Sasha Doll, their name came directly from the Swiss artist herself, Sasha Morgenthaler.

Christmas 1968 was one of the best memories I ever had as a child. You wouldn’t  know it to look at me, but I was quite a tomboy back then and loved taking off somewhere on my beloved red bicycle or getting into scrapes climbing up trees or over the neighbours wall to pinch an apple (or two)!

So I really do not know what my mother was thinking of when she saved up all her house-keeping money to buy me a Sasha? Back then, the dolls were sold exclusively in the high-end stores such as the House of Frazer, so I guess she must have bought my doll from Kendals in Manchester (U.K).

Typically, as most children behave on Christmas morning, my older brother and I would get our poor Mum and Dad up at the crack of dawn to open our presents. I vaguely recall the apprehensive smile on my mother´s face when she handed me the wrapped up tube and must have been blown away by my reaction.

I just remember silently staring in disbelief at the most beautiful thing I had ever seen and could not comprehend that this exquisite doll actually belonged to me? Maybe at that very moment, my mother breathed a sigh of relief that her scruffy, dirty-kneed scally-wag was indeed hiding a little girl after all?

As the years followed, I still took off on my bike….but never without my beloved Sasha in tow!

I know my story will resonate with many Sasha lovers from around the world as they recall their own emotions of their very first sightings of the doll. It doesn’t matter how young or old you are, the magic of Sasha Morgenthaler will continue to touch peoples lives and bring immense joy to future generations to come.

For a history of Sasha Dolls, Read More » 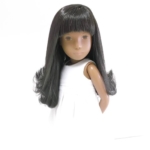